Recording Transactions: The Source Documents, General Journal, General Ledger, Trial Balance
In order to put together all of the accounting and bookkeeping elements a company will do, and understand how all of these elements work together–we need to understand the actual bookkeeping process; that is, the exact mechanical process to keep sales, expenses, revenue, and income documented in all the right places so that we can provide accurate financial statements in a timely manner. To do this, we need to understand the accounting structure.

Source documents are the business forms that document all financial transactions of a business from buying a chair to selling a pencil. Business forms include purchase orders, receipts, and invoices. The actual specifics of business forms used by companies vary greatly. Some companies require an unnecessary amount of paperwork to document a simple purchase order. Others are too lenient, allowing managers to order and pay for or sell items with too little accountability and little or no inventory adjustments. It is important for all businesses to have an efficient and accountable system that documents all purchases, sales, and inventory. Doing so requires the use of source documents that record any specific item’s financial transaction for processing and bookkeeping.

In this computer age, some of these concepts now are incorporated into a computer database that we enter data directly into, and the database makes all the associations we need automatically, storing everything in one central, categorized area. It might seem at first glance that to learn about all these items is useless because everything is computerized, but that is not true. Even though electronic processes have eliminated a lot of physical paper trails that get lost in misfiling, the concepts driving these computerized accounting systems are all rooted in the accounting structure. Everything that we learn here is pretty much represented the same way in a computer system.
In general, everything starts from a source document and then moves to a journal. In the accounting world, the journal is a book that contains original entries for financial transactions. Journals store financial transaction information ultimately derived from source documents. Later, these journal entries are summed up and then posted, or transferred, to a ledger.

A journal records all entries chronologically, though in a computerized accounting system you would be able to sort by any parameter. This process is known as journalizing.

There are several different journal types; many of them are special to a company’s needs. For our purposes, we will focus only on general journals and a couple of special journals.

One special journal type is known as a sales journal, though it may be called something else, depending on the company. As the title indicates, a sales journal would record the sales of a company. A typical example would look something like this:

This would be considered a special journal. It is recording only sales transactions. This data is then netted at the end of the month and transferred to the general journal.

Want to learn more? Take an online course in Accounting & Bookkeeping for Everyone.

In the general journal, you would record your debits and credits for every financial transaction (lefts and rights). Take a look at this sample using the earlier model of the Orion Computer Repair Company:

Using the above information, here is how it would play out in the general journal:

In any typical general journal, you will have a date, description, posting reference, debits, and credits. Note that the posting reference is the reference number that the entry corresponds to when it is posted to the ledger. It is blank in our example because nothing has been posted yet.

Date entry: You will notice that for many of these items, summarized here, there should be multiple dates. For example, accounts receivable’s billing of the customers repairs did not correspond to the same day as when the cash was actually received. The date is the first date the transaction started. You do not need to add subsequent dates unless they carry over to another month or accounting period. For the ease of this example, we assume that everything opened and closed in the same month (September).

Posting reference (PR): In this example, it is not used. However, this would be the unique reference identification that corresponds to the entry in the general ledger.

Debit: This is the amount that is debited for the indicated account.

Credit: This is the amount that is credited for the indicated account.

Using the above example of Orion Computer Repair Company, a general ledger may look something like this:

The posting reference in this example is listed as “GJ1,” which means General Journal Page 1, but could really be anything and even in more detail depending on the complexity of an organization’s accounting system.

The trial balance is exactly as its name suggests: It is a trial balance or test run of balancing the books. This is not a report that is seen by owners and investors; it is a report generated for the accountant, by the accountant, to determine not only where the company stands financially, but how well the books are in balance.

The trial balance is generated from the general ledger. The trial balance consolidates all this information into one convenient statement for the accountant to review and check against other financial reports, ledgers, and journals.

When the general ledger has been reviewed, balanced, totaled, and transferred to the trial balance sheet, it will look something like this: 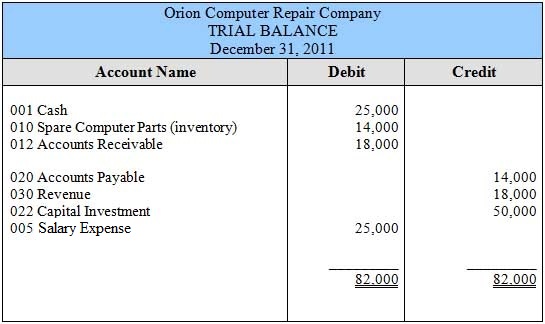 The above trial balance sheet is oversimplified to suit our small company example. However, it does show how the overall trial balance would be balanced if everything was done properly. This is critical. If the debits and credits of a trial balance are not equal, something is amiss in the general ledger.

Of course, if the trial balance balances, it does not mean that it is error-free. A trial balance is still prone to the following errors:

If the trial balance does not balance, this means there could be errors, ranging from a simple numeric miscalculation to an improperly entered journal entry or journal posting. The best remedy against a disastrously non-balanced trial balance report is to run the report frequently and balance it frequently. In other words, try to catch the errors as quickly as they appear, instead of trying to fix everything at the year-end.