The Earth’s surface is not a continuous layer. The lithosphere is in fact broken up into several large pieces called crustal plates or tectonic plates. These large segments of the crust and upper mantle float on the denser semi- molten rock beneath them and move very slowly across the surface of the planet. Each plate moves only a few centimeters in a year but their movement affects us all. Plate tectonics can be described as the study of crustal plates and how their movement affects the Earth’s surface. 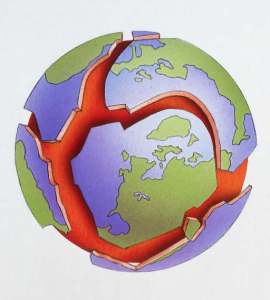 The Earth’s crustal plates move slowly over the planet’s surface, interacting in various ways. The area where the edges of two plates meet is called a plate boundary or a plate margin. The way that these plates are moving relative to each other determines the type of plate boundary. There are three types of plate boundary; convergent, divergent and transcurrent boundaries.

As the massive plates are pushed together, the rocks along the plate boundary are placed under tremendous pressure. This pressure often causes them to buckle and fold. In some areas, rocks are pushed downward while in others rocks are pushed upward. Rock may be pushed thousands of feet upward forming mountain ranges. Most of the very high mountains in the world were formed in this way.

Many convergent boundaries occur along the edges of our oceans. In these regions, oceanic crust collides with continental crust. The denser oceanic crust is pushed under the less dense continental crust. This process is known as subduction and the area where it occurs is known as a subduction zone. As the oceanic crust is pushed down into the mantle, it melts and this molten material may rise through weaknesses in the crust forming volcanoes near the plate boundary. Volcanoes formed underwater may eventually grow tall enough to rise above the surface, forming volcanic islands. This is how many of the islands of the Lesser Antilles were formed including Dominica, St. Vincent and St. Lucia.

Watch the video below which explains the theory of plate tectonics, then take the Plate Tectonics quiz!