The Menstrual Cycle and Pregnancy

This cycle occurs in females only and happens on a monthly basis. A typical cycle is 28 days long and begins with menstruation (period). Changes in hormone levels make this cycle possible. The two hormones involved are oestrogen and progesterone.

Menstruation is the period during which the lining of the uterus was shed along with an unfertilized egg.

Ovulation – the release of a mature egg from one of the ovaries monthly.

Menstruation often begins once a female begins to undergo puberty. It only follows that ovulation would also begin at this point. Without ovulation, fertilization cannot occur. Although the menstrual cycle seems to begin with menstruation, a female may become pregnant without menstruating and even before menstruation begins. Fertilization is the process by which male and female sex cells fuse.

The levels of oestrogen are highest around the time of ovulation as it prepares the body for the release of an egg. It also helps to maintain the lining of the uterus. Progesterone also helps to prepare the body for possible pregnancy. This means that these two hormones are at their lowest during menstruation.

Other hormones involved in the menstrual cycle are:

Once pregnancy occurs, there will be a disruption in the menstrual cycle. This is because the lining of the uterus will not be shed as it is needed for cushioning the developing embryo. 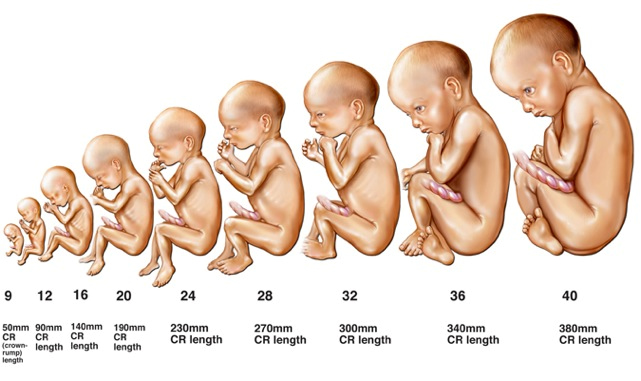 During pregnancy, the developing embryo is surrounded by a sac known as the placenta. Attached to the placenta and the developing baby is the umbilical cord. The placenta is responsible for supplying the baby with oxygen and nutrients via the umbilical cord. The baby is also surrounded by amniotic fluid which helps with support and protection of the embryo. It is this fluid that is released just before a woman goes into labour. The placenta then comes out after the birth of the baby and is referred to as the afterbirth.

*Embryo – first eight weeks after the formation of a zygote.

*Foetus – developing baby after the first eight weeks of conception.