There are many types of covalent compounds. We have covered the diatomic molecules such as the oxygen and the nitrogen molecule, however the large majority of covalent compounds are not diatomic and involve several different kinds of atoms. A simple example of this is water. You know this is a commodity we use in everyday life. The formula for water is H2O and the structure of this is shown below: 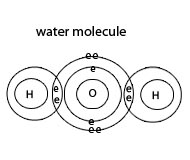 Notice that for water, there are 2 Hydrogen atoms and 1 oxygen atom as we would expect because oxygen needs 2 electrons to have a complete outer shell and hydrogen needs 1 electron. As a result Oxygen forms two single bonds with Hydrogen.