The blood from the afferent arteriole, which enters the Bowman’s capsule, is rich in nutrients such as glucose, fatty acids, amino acids, vitamins, proteins, urea and excess salts.

The membranes of the glomerulus and Bowman’s capsule are permeable to small molecules and ions, such as water, urea and salts, but are not permeable to large particles such as proteins and red blood cells. Because the lumen of the afferent arteriole is significantly smaller than the efferent arteriole there is a large amount of pressure in the glomerulus. This pressure forces substance such as water, salts, urea and other solutes into the kidneys. Larger particles such as proteins and red blood cells do not pass through the walls of the glomerulus and pass through to the efferent arteriole.  This process is called ultra-filtration and the fluid which passes into the Bowman’s capsule is known as the glomerular filtrate.

Re-absorption from the Convoluted Tubules

The glomerular filtrate moves along the proximal convoluted tubule where the absorption of most of its contents takes place. The absorption occurs across the surrounding capillaries which branch from the efferent arteriole. About 80% of the water entering the Bowman’s capsule is absorbed into the surrounding capillaries, as well all as glucose and other nutrients. Variable amount of salts are also absorbed, by active transport. The remaining solution passes along the Loop of Henle to the second convoluted tubule which joins the collecting duct. Fine tuning of the water and salt concentration takes place at these sections to maintain a suitable concentration in the blood. The reabsorbed substances are returned to the general circulation by the renal vein. The fluid entering the collecting duct is much more concentrated than the glomerular filtrate, and it contains mostly water, urea and some salts. 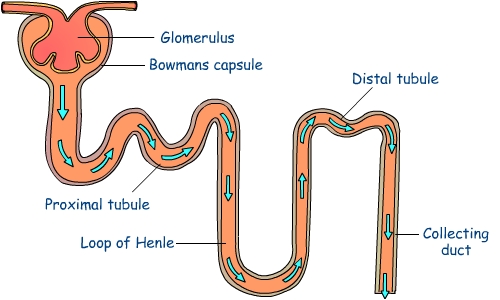