Diffusion occurs in everyday life. For example, whenever someone sprays perfume you will eventually smell it across the room. This is an instance of diffusion. 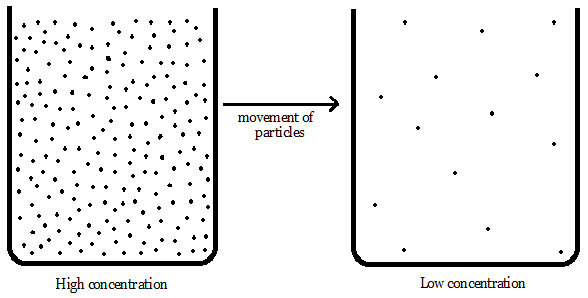 DIAGRAM SHOWING THE DIFFUSION OF PARTICLES

Diffusion is mostly seen in liquids and with gases. This is because solid particles are held together very closely and cannot move very far. When molecules can move freely, they tend to spread themselves out as evenly as possible.

Diffusion not only occurs in everyday life within the environment, it also occurs within the bodies of living organisms.

-The oxygen and nutrients from a mother is transported across the placenta via diffusion to the foetus during pregnancy.

-Carbon dioxide needed for photosynthesis is diffused from the atmosphere into plants through pores called the stomata.

Fill a container with water and leave it to stand. Place some dye in the container of water, as shown above and leave for about 10 minutes. What do you think will be seen after the time has passed?