Decimals consist of a whole number and a decimal fraction. 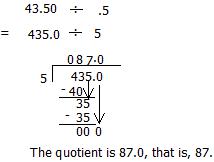