Arteries take blood rich in oxygen (oxygenated blood) to the capillary network, which intern feeds the cells in the body. Deoxygenated blood (blood with very little oxygen) is taken back to the heart through veins. It then goes to the lungs where gas exchange occurs so the carbon dioxide can exit the body. There are however exceptions to this, as the hepatic portal vein transport blood rich in nutrients from the small intestine to the liver. A portal vein is a special type of vein which links capillary networks.

The human heart has four chambers:  right atrium, right ventricle, left atrium and the left ventricle. The heart is made of a special type of muscle called the cardiac muscle. This is the only muscle in the body that does not experience fatigue and for good reason! Can you imagine if your heart got tired and couldn’t beat?

-The aorta is the largest artery. Oxygenated blood from the left ventricle is sent to this artery where it then sub-divides sending blood around the entire body. 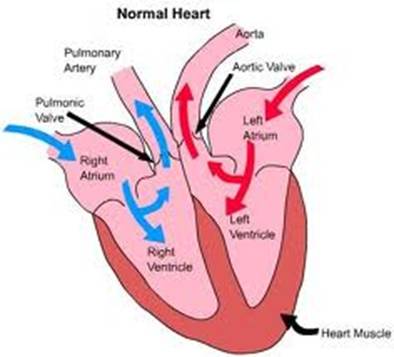