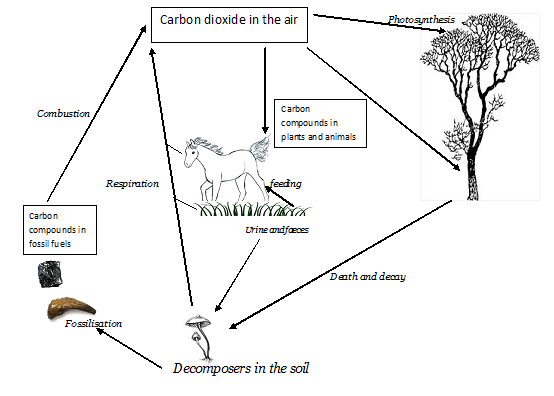 With light energy from the sun along with the presence of chlorophyll, water and carbon dioxide are used by plants to create carbohydrates via photosynthesis.

Through the process of respiration, living organisms (plants and animals) utilize oxygen in order to convert food into energy; carbon dioxide is released by this process.

Plants may be eaten by animals or later die and decompose to become fossil fuel. Fossil fuels formed from the decomposition of plants and animals are later burned to provide energy returning carbon dioxide to the atmosphere.

Carbon is transferred up the food chain from the producers (plants, which create carbohydrates via photosynthesis), to varying levels of consumers.

Carbon may also be used in the formation of carbonated rocks, a process known as chemical combination. When these rocks are broken down, they release carbon dioxide back into the atmosphere. This process is known as weathering.

The processes that require carbon dioxide are photosynthesis and chemical combination.

The processes that release carbon dioxide/carbon are respiration, weathering and combustion.