There are 2 types of circulatory systems, closed and open.

-Open circulatory systems: blood may exit the blood vessels at a point and re-enter at another.

Humans have a closed circulatory system, with diffusion occurring across the thin capillary walls to the cells of the body.

The opening of blood vessels is called the lumen and is surrounded by 3 areas:

1. Tunica intema– this is the inner most layer facing the blood. It is composed of an innermost layer of endothelium surrounded by connective tissue.

2. Tunica media– composed of smooth muscle of varying elasticity. Arteries have large amounts of elasticity while veins have no elastic fibres. 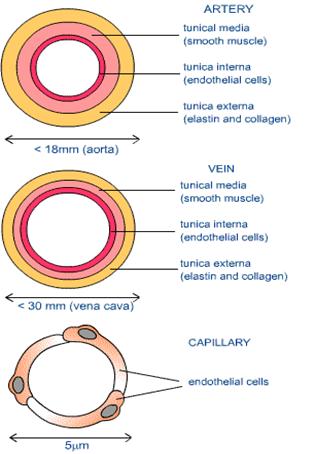 There are three kinds of blood vessels:

1.Arteries
These are thick walled, elastic blood vessels, which carry the blood from the heart. The tunica intema, tunica media and the tunica adventitia is present in arteries. Arteries have to be thick to withstand the blood pressure from the heart. When the heart beats, the arteries expand as they fill with blood, between heartbeats the arteries contract, forcing blood forward.
As the arteries move further away from the heart, they branch into smaller less muscular units. These branched arteries eventually branch themselves into smaller units called arterioles. Arterioles are small, nearly microscopic arteries that eventually branch into even smaller units called capillaries. Arterioles also control the entrance of blood to the capillaries through vasoconstriction and vasodilation.

2.Capillaries
These are the smallest blood vessels in the circulatory system. Capillaries branch from arterioles and rejoin to form venules. There are numerous capillary beds around the body. Their walls consist of a single layer of cells. Because of the thinness of the walls of the capillaries, materials and gases are allowed to diffuse in and out of the capillaries. For example:

-Lungs
Oxygen diffuses into the capillaries from the lungs and carbon dioxide diffuses out.

-Kidneys
Waste material diffuses out of the capillaries surrounding the kidneys and into the kidneys. From the kidneys they exit the body.

3.Veins
The veins carry deoxygenated blood from the capillaries back to the heart. Capillaries join together to form venules, these venules then join to form veins. Veins are a lot less muscular than arteries because they do not carry blood under high pressure from the heart. As a result the walls of the veins are thin and contain no elastic tissue. Veins have a large lumen which lowers the resistance of blood flow and also has valves which prevent back flow of blood. Since veins are not very muscular, they must rely on contraction from surrounding muscles to help them push blood along. 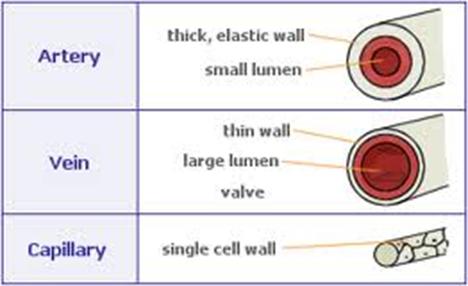