All animals, as long as they are living, need to eat food. There is a permanent order among animals, depending on what they are built to consume, that decides how food gets eaten. In this permanent order, there is a flow of energy and materials from one organism to the next.

The scenario of who eats what in a specific habitat is called a food chain. The position of each organism in a food chain is called the trophic level.

The two main elements of a food chain are the producers and the consumers. The producers make their own food from inorganic raw materials and consumers consume other organisms. A food chain inevitably consists of herbivores and carnivores. In its simplest terms, herbivores eat plants and carnivores eat other animals. We, humans, eat both plant and animals, therefore we are omnivores.

The trophic level mentioned above makes use of the terms, producer and consumer that we just discussed. The source of all food activity is called the autotrophs. They are the producers, because as mentioned above, they manufacture their own food. This is the first trophic level. Next, we have the herbivores, these are the primary consumers, they eat the producers. We then have the secondary consumers, which just happens to be carnivores, these eat the primary consumers. Depending on the complexity of this food chain, you may see tertiary consumers as well, which will then consuming the secondary consumer. These labels given to the different organisms in the food chain are the different trophic levels.

Using the food chain presented in the picture above we have the:

Which translate to the:

All consumers from the secondary consumer onward are labeled carnivores.

Food chains are connected to form food webs. Food webs show the energy flow through part of an ecosystem. See the image below: 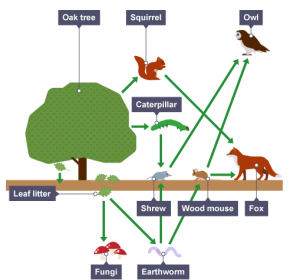 From this food web we can pick out the following food chains:

An ecosystem can be described as a community of living organisms sharing an environment. How well an ecosystem survives is dependent on the network of interactions between the organisms.

All organisms within an ecosystem need to live. In its simplest terms, the area in which an organisms lives is called its habitat. Habitats do not have an unlimited supply of resources. Therefore competition may be necessary for food, water, space, mates and general survival.

Plants, because they make their own food, do not compete for food. However, they compete for resources, for example water and space.

Conditions in an ecosystem may change from time to time. The food web, as mentioned above is a part of the ecosystem, so a change in the food web can result in a change in the overall system. If, for example, there are changes in the population of one organism, then another organism can be affected. Think about it this way, consider this food chain:

If there is a drought, then the grass will not be as healthy or prolific. This will in turn affect the caterpillar population, which depending on the severity of the drought may start to die out which will provide one less source of food for the birds. Competition, for food will not increase in that ecosystem because a food source is deficient. This occurrence, of one population having an effect on the other is called interdependence.

Pyramids play an important role in the analysis of an ecosystem and give an idea of the energy flow through the same. There are three different types: pyramid of numbers, biomass and energy.

This shows the population at each stage of the food chain or the number of individuals counted at each trophic level. We are able to get a pyramid of numbers because:

The wider the bar the greater the number or organisms in the food chain.

With regards to energy distribution, energy is lost to the surroundings from one trophic level to the next, this is why in the picture above there are fewer organisms at each trophic level.

Since all organisms are made up of roughly the same molecules in similar proportions, a measure of their dry weight is a rough measure of the energy the contain. The biomass is the total dry mass of one animal or plant species in a food chain or web. A pyramid of biomass shows the biomass at each trophic level.

Biomass, like energy, decreases from one trophic level to the next, so the bars get narrower towards the top. Getting data for an accurate pyramid of biomass can be difficult because, measuring biomass means that all water would have to be removed from the organism, and an organism may belong to more than one trophic level and so cannot be easily represented by a bar. 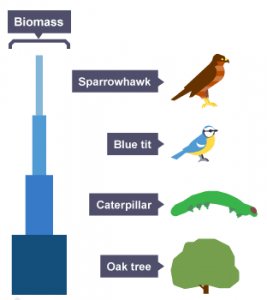 The Pyramid of Energy

The decrease in total energy available at each higher trophic level is called the pyramid of energy.

At each link in a food chain, a substantial portion of the sun’s energy, originally trapped by photosynthesis is released to the environment as heat. Therefore the total amount of energy stored in the bodies of a given population is dependent on its trophic level as briefly hinted at above.