The states of matter, depending on the situation, can stay in one form or change to another. The change comes with extremes in temperature. These changes include: freezing, melting, boiling, evaporation, sublimation and condensation.

Heat applied to a solid causes the particles to move faster, and more frequently. Under standard pressure, when a certain temperature is reached–the melting point–the solid will begin to turn into a liquid. Even if you continue to apply heat, the temperature will not rise above the melting point until the whole sample is liquefied. This is because the heat energy is being used to convert the solid to liquid form.

The melting point of a pure substance can be determined to within 0.1 degrees C, the point at which the solid and liquid phases are in equilibrium.

The conversion of a solid directly into a gas, without passing through the liquid stage is the process of sublimation. This can only occur when the kinetic energy of the particles are greater than the atmospheric pressure surrounding the particle.

The process by which water changes from a liquid to a gas or vapor. It is sometimes referred to as vapourisation.

For evaporation to occur, the particles in a liquid must have different energies. Some will have enough energy to escape liquid form and become a gas. As a result, the remaining particles will have less energy than before, and the liquid will cool. This is why evaporation has a cooling effect; for example, when you sweat, your body cools down.

In this process, gas is changed to liquid. When gas particles do not have enough energy to remain as separate particles in gas form, they come close together to form bonds. When this happens energy is released. This is why steam burns skin when you come in contact with it, it is the heat energy that is being released that causes this. The rate of condensation increases when the temperature of gas decreases.

As a liquid is heated, its vapour pressure increases until the vapour pressure equals the pressure surrounding the liquid. Gas forms within the bulk liquid, as bubbles, and then rise to the surface where they burst and release the gas. They don’t burst inside the liquid because the bubbles have enough vapour pressure to withstand collapse. In order to form vapour, the molecules of the liquid must overcome the forces of attraction between them. The temperature of a boiling liquid remains constant, even when more heat is added.

Factors that affect the boiling point are the pressure and the types of molecules. For pressure when the external pressure is:

View the graph below which shows the rise in temperature, as more heat is added and its effects on the different states of matter. 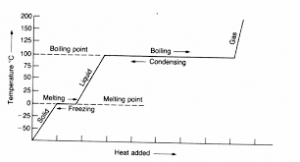 The video below gives a good overview of the states of matter and the changes they undergo under different conditions as discussed above.