For the functions of various cell structures, see this post.

In today’s post we will look at some of the different cells which make up the human body. They are:

There are four major tissues in the human body: connective, muscle, nervous and epithelial. Of the four, epithelial is the most prolific.

Epithelial cells are bound together in sheets of tissue called epithelia are the safety shields of the body. They are a barrier between the inside and outside of your body and are often the first place attacked by viruses as they begin their invasion deeper into the body. Sheets of epithelia are held together through several types of interactions, including: tight junctions, adherens, desmosomes and gap junctions.

Epithelial cells differ from other cells because they are:

Epithelial cells have many different functions that are not specific to every type of epithelial cell. They are listed here:

The different types of epithelial cells are listed below. 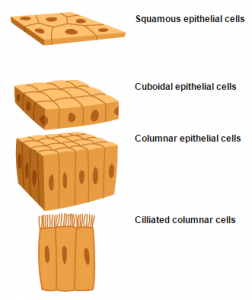 A sperm cell is a gamete. Gametes are sex cells. Sperm cells are the smallest human cells. They consist of a nucleus, small amount of cytoplasm, some mitochondria and a long tail.

With regards to mobility, the cytoplasm of the sperm cells, is scanty as mentioned previously and concentrated in DNA. This prevents the usual movement of cytoplasm. However, the sperm cell on a whole is externally active and mobile. They use their tails to swim.

There is no interaction with the environment for sperm cells. They do not absorb or release substances. They are closed off from the environment and are metabolically passive. They can be preserved and frozen at temperatures below 60 degrees C and are not easy to destroy.

Sperm cells develop in the testicles, just outside the body in a relatively cold environment. The first sperm cells are formed at puberty, prior to that they are not produced. As of puberty, sperm cell production keeps going continuously; sperm cells are constantly being formed. 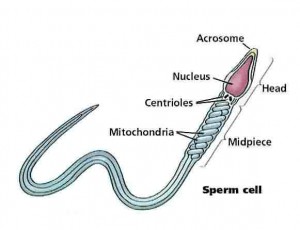 The second human gamete is the egg. The egg, which is also referred to as the ovum or oocyte, is the largest cell in the human body. This cell has a large amount of cytoplasm in which the nucleus is dissolved until just before conception.

The egg is metabolically active and open to the environment. An egg cell can only live for about 12 to 24 hours in its own environment. They can be easily destroyed.

The egg develops in one of two ovaries in the warm abdominal cavity. Egg cells are produced before birth in vast numbers. In this form they are referred to as primordial cells. Primordial cells, once they are formed, begin to die out. This begins prior to birth and continues after birth. At the onset of puberty, there are about 40,000 ova remaining. Once menstruation begins, every couple of weeks, some primordial cells mature into eggs while the rest die. This continues for about 30 years or more until menopause kicks in, at which point there should be no more primordial cells remaining. 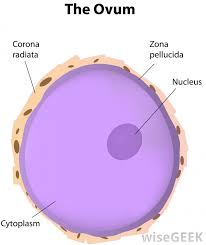 The cells of the nervous system are called neurones and are specialised to carry messages through an electrochemical process from one part of your body to another.

Neurones are similar to other cells in the body because:

With as many similarities that they have, there are differences as well:

Neurones can be divided into three types: 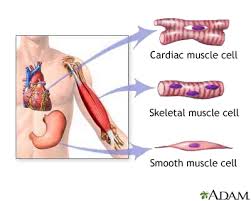