Answer the THREE questions in this section.

1. Mikail Jack is a music artiste. On March 31, 2011, he provided the following information about his assets and liabilities:

6. The Cancer Society owes him $8,000 for performing at a public function.

7. He paid $650 in advance to Star Advertising Company which is working on his new advertising campaign.

Prepare a classified Statement of Financial Position (Balance Sheet) for Mikail Jack, as at March 31, 2011. (Use the order of permanence in classifying assets.)

2. Chester and Norbert have been in partnership for several years. Their partnership agreement provides the following:

1. Partners are to receive interest at the rate of 10% per annum on their opening capital balances.

2. Interest at a rate of 5% per annum is to be paid on partners’ drawings during the year.

4. Profits and losses are to be shared equally.

The following information has been extracted from their books:

(a) Prepare the journal entry to record the admission of Telford into the partnership.

The ONLY CHANGE in the partnership agreement provides for profit or loss to be shared among the partners in the ratio of Chester 3: Norbert 2: Telford 1. Note all other provisions remain the same.

(b) Prepare an extract of the Partnership Appropriation Account up to the share of remaining profit for the year ended December 31, 2010.

(c) Complete the worksheet provided to arrive at the share of remaining income or profit earned by EACH partner.

3. Chris Luder and Sons maintains both a three-column cash book and a Petty Cash Book. The Petty Cash Account should start with $400 in hand every month. All payments for office supplies and cleaning expenses are recorded in the Petty Cash Book.

During the month of April, the following transactions were recorded in the books, as indicated.

(a) Draw up the three-column Cash Book for Chris Luder and Sons for the month of April 2011.

(b) Using the worksheet provided, draw up the Petty Cash Book for Christ Luder and Sons for the month of April 2011.

(c) Post the TOTALS of office supplies and cleaning expenses columns in the appropriate ledger.

Answer any TWO questions in this section. 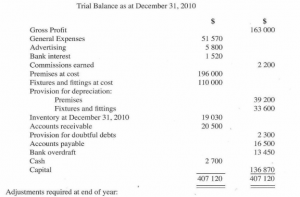 (i) entering EACH item from B.C. Yen’s Trial Balance which requires adjustment

(ii) Showing how EACH item is to be adjusted and the amount of the adjustment.

(b) Prepare the Fixed and Current Assets sections of B.C. Yen’s Balance sheet as at December 31, 2010 showing clearly any changes taken into account.

5. Martha’s Cakes & Confectionery is a manufacturer producing a variety of baked goods for sale to supermarkets. At December 31, 2010, the following information became available: 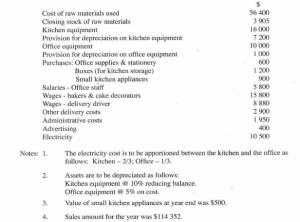 6. Fifty housewives int he Goodlands community started a buying cooperative. On May 1 2009, they paid a $6.00 registration fee, and agreed that each member would buy 25 shares at $10.00 each.

(a) Prepare the journal entries to record the monies collected for:

At the end of the second year of operation, total share capital was $25000. The following figures were extracted from the books as at April 30, 2011:

(b) Prepare the Appropriation Account for the Goodlands Housewives Cooperative for the year ended April 30. 2011.

(c) Mrs. Susan Cunningham, a Co-operative member who now owns 42 shares, has receipts totaling $3845 in respect of her purchases from the Goodlands Housewives Cooperative during the last year.

(i) Calculate the amount of the patronage refund due to Mrs. Cunningham. (Show all working clearly.)

(ii) Calculate the TOTAL amount that should be paid to her, by the cooperative, out of this years surplus. (Show all working clearly)

(d) State ONE benefit, to the housewives, of joining the Goodlands Cooperative Housewives Society.

7. (a) Cartel Vee sells leather sandals. His transactions for the month ended July 31, 2010 were as follows:

Show workings for all calculations.

(i) Calculate the amount of units held as unsold stock at year end.

(ii) Calculate the value of the closing stock using the

(iv) State the MAIN reason why it is necessary to know the stock valuation method being used by a firm.

(v) Calculate the cost price that would be used for the AVCO method in valuing closing stock.

(vi) What ratio can be calculated to measure how quickly Cartel Vee sells his stock?

(b) At the end of Cartel Vee’s first year of operation his accountant presents the following ratios comparing the performance of Cartel Vee with a competitor:

(i) Which of the ratios above measures control of costs?

(ii) Which of the ratios above measures a firm’s ability to meet its short-term debts?

(iii) Prepare a short report, using both ratios, comparing Cartel Vee’s performance with that of his competitor.