In this post we will look at terms you will need to understand when discussing dramas. The prescribed drama texts for CXC 2015 are: Julius Ceasar by William Shakespeare and The Lion and the Jewel by Wole Soyinka. While reading those texts, bear these terms in mind for future analysis.

An act is a major division in the action of a play. Plays are usually divided this way for ease of manageability. Recall that Shakespearean plays are divided into five acts.  The structure usually follows the method outlined below:

Acts in plays are often divided into scenes. In modern plays, they tend to consist of units of action in which there is no change of place or break in the continuity of time.

This is the part of a literary work that sets the stage for what is to follow. It introduces the themes, setting, characters and circumstances. The exposition can be identified in the first few chapters or pages where the author gives a description of the setting and the mood before the action takes place. This would take place, as alluded to above, in act 1, in the case of a drama.

This is the struggle between two forces and can either be internal or external. External conflict tends to exist between two characters or between a human and a physical challenge. Internal conflict is seen when the character struggles within themselves, it is often emotional or ethical.

The difficult circumstances that come about through the character’s attempts to find solutions to his or her problems.

The point in the story where the tension is the highest. The point in the action where the conflict is about to be resolved. The climax occurs when the other alternatives to solving the problem have been eliminated.

French for unknotting; the action or intrigue of the piece ends in success of failure for the protagonist. The conflicts are settled, the mystery is solved or the misunderstanding cleared away. A frequently used alternative term for the outcome of the plot is resolution.

In many plots the dénouement involves a reversal of fortune. For example, in a tragedy, the main character may start at the top of their game in life but by the end of the story they have lost everything. The reversal frequently depends on a discovery. In this the protagonist realises something of importance that they did not know before.

How the author creates people for a story. Character is revealed by what the author says about the individual, how they speak, think, act and how other characters act towards them and what they say about the character.

The main character in a plot around whom out interest centres. Alternatively the hero or heroine.

The character who stands against the main character in an attempt to thwart their goals.

The action of the story ordered to achieve particular effects. In other words the action that moves from the opening situation to the problem and on through to resolution.

A second story that is complete and interesting in its own right. If done well, the subplot can serve to broaden our perspective on the main plot and to enhance rather than diffuse the whole effect. The subplot can relate to the main plot as an analogy or counterpoint against it.

A fictional work in which the action of the story is presented for the reader’s interest and amusement. The situations that the characters are placed in engage the reader’s humour rather than concern and the impression often given is that no great disaster will occur. The ending is generally happy for the main characters.

The setting, characters and events are taken from history and are made crucial to the action of the story and its narrative.

Literary and dramatic representations of serious actions which often end with disastrous conclusions for the protagonist.

Generally represents a chivalric age, often one of highly developed manners and civility. Often the lead male engages in a quest to gain the lady’s favour. It stresses chivalric ideals of courage, loyalty, honour, mercy to an opponent and elaborate manners. It delights in wonders and marvels.

A type of Elizabethan or Jacobean drama which mixes the standard characters, subject matter and plot of a tragedy and a  comedy.

Theatre of the Absurd

The term applied to works in drama and prose fiction which have in common the sense that the human existence is useless and can only be represented in works of literature that are themselves useless.

Literary art where a subject is diminished or detracted from by making it ridiculous and evoking towards it attitudes of amusement, contempt, scorn or indignation. Note it is different from comedy because comedy employs laughter for laughter’s sake, whereas satire uses laughter as a weapon.

A type of comedy designed to provoke the audience to simple hearty laughter. It does so by employing highly exaggerated or caricatured types of characters, puts them in improbable and ludicrous situations and makes free use of sexual mix-ups, broad verbal humour and physical bustle and horse-play.

Western development of drama beginning in the late 19th century famously connected with the plays of Henrik Isben (who is not on your reading list).

Originally applied to all musical plays, and plays written in the Victorian Period for production with musical content. The meaning is extended to any literary work or episode, that relies on implausible events and sensational action.

An extended speech by one person.

What characters say and their distinct way of saying it.

A monologue in which a character expresses his or her thoughts.

When a character expresses his or her thoughts or intention on a short speech, which by convention, is inaudible to the other characters on the stage.

Construction of the play that shows time place and action.

Instructions written into the script of the play, indicating stage actions, movements of performers, or production requirements. 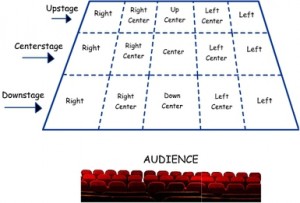 A single person who spoke the prologue and epilogue to a play and sometimes introduced each act. This character serves as the author’s vehicle for commentary on the play as well as for exposition of its subject, time and setting and the description of events happening offstage.

Used to signify all objects and qualities of sense perception referred to in a poem or other work of literature, whether by literal description, allusion or by use of similes and metaphors.

A conspicuous element, such as a type of incident, device, reference, or formula which occurs frequently in works of literature.

The use of symbols to signify ideas and qualities by giving them meanings different from their literal sense. It can take different forms. It can be an object, or an action, event or word spoken or done by some one.

A situation in a play or a narrative in which the audience or reader shares with the author knowledge of present or future circumstances of which a character is ignorant. In that situation the character unknowingly acts in a way that we recognise to be grossly inappropriate to the actual circumstances, or expects the opposite of what we know that fate holds in store, or says something that anticipates the actual outcome, but not at all in the way that the character intends.

The term applied when the audience is aware of some impending catastrophe or important fact of which the characters are either totally ignorant or not fully aware.

Technique in which two or more ideas, places, characters or their actions are placed side by side in a narrative or a poem for the purpose of developing comparisons and contrasts.

The literary context often refers to whatever clues are given in the literature which will help you to understand the situation and surroundings of what is being portrayed. Common contexts are: social, historical, political, religious, ethnic, moral, intellectual, and cultural.