By the end of this post you should be able to draw simple diagrams of plant and animal cells, and explain their structure.

Below is the picture of a simple plant cell and its components. 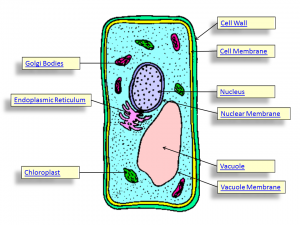 Below is a picture of a simple animal cell and its components. 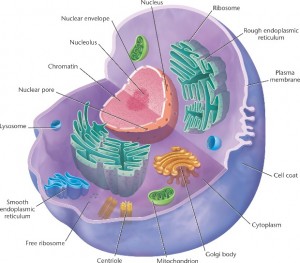 Cell Wall: Plants, bacteria, fungi and algae have cell walls. The cell wall supports and protects the cell. It is tough, usually flexible but sometimes fairly rigid layer. It is located outside the cell membrane and provides these cells with structural support and protection; it can also act as a filtering mechanism. One major function of the cell wall is to prevent over-expansion when water enters the cell. In plants the cell wall is composed mainly of glucose. Animal cells do not have a cell wall.

Cell Membrane: Cell membranes also play a role in protection. They also organise cells. This outer plasma membrane regulates what enters the cell and how much. They are composed of glycerolphospholipids: a glycerol molecule, phosphate group and two fatty acid chains. The glycerol head is hydrophillic (water loving) and the fatty acid chains are hydrophobic (water hating) they arrange themselves in such a way, that the hydrophobic tails are facing each other and the hydrophillic heads are facing outward.

Cytoplasm: This is a thick liquid residing between the cell membrane holding organelles. Note it DOESN’T contain the nucleus. All cell contents of prokaryotes (cells without a nucleus) are contained within the cytoplasm.

Nuclear Membrane: This structure separates the nucleus from the cytoplasm in eukaryotic cells (cells with a nucleus and organelles). It is actually a double membrane, one inside the other.

Nucleus: This is commonly known as the cell’s control centre. This is the largest of the organelles within a eukaryotic cell. It is the command and control centre of the cell, directing all of its activities. It is also the genetic library where the hereditary information is stored.

Nuclear Pore: This is a small opening or passage way through the nuclear membrane. It connects the nucleus with the cytoplasm.

Vacuole: This membrane bound organelle is present in all plant and fungal cells and some protist, animal and bacterial cells. These closed compartments are filled with water containing inorganic and organic molecules including enzymes in solution. Vacuoles are formed by the fusion of multiple membrane vesicles. There is no basic shape or size, and its structure varies according to the needs of the cell.

Chloroplast: All photosynthesis in plants and algae take place in this bacteria like organelle. It is bound by a double membrane. They have large circular DNA molecules. Plant cells can contain from one to several hundred chloroplasts depending on the species.

Endoplasmic Reticulum: Often abbreviated ER is referred to as the transportation system. It surrounds the nucleus and fills the cell dividing it into compartments, channeling the transport of molecules through the interior of the cell and providing the surfaces on which enzymes act. The surface of the ER is the place where the cell manufactures many carbohydrates and lipids. It is also where the cell makes proteins for export (eg. enzymes).  The ER specifically for manufacture of proteins has ribosomes on the surface and as such looks rough under the microscope.; this type of ER is termed rough ER. Regions where there are little to no ribosomes, the surface looks smooth and so it is called smooth ER.

Golgi Bodies: This is referred to as the delivery system. Once a new molecule is made on the surface of the ER, they are passed out into the vessel forming system called the Golgi Complex. These bodies function in the collection, packaging and distribution of molecules manufactured din the cell.

Mitochondria: This is the powerhouse of the cell. These organelles are bound by a double membrane. The outer membrane is smooth; the inner membrane is bent into numerous folds called cristae (singular: crista). The cristae partition the mitochondria into two compartments an inner matrix and an outer compartment. These organelles convert energy into a form that is usable by the cell. They are located in the cytoplasm and are the sites of cellular respiration which generates fuel for the cells activities.

Lysosome: These are the recycling centres of the cell. They digest worn-out cell components to make way for newly formed ones while recycling the proteins and other materials of the old parts.

Ribosomes: These organelles manufacture protein. They are typically composed of two subunits, one small and one large.

Centriole: These are found in animal cells only and help to organise the microtubules during cell division. They occur within pairs in the cytoplasm and are usually located at right angles to one another near the nuclear envelope.

Chromosomes: These carry genetic information in the form of DNA.

Remember if you have any questions or concerns please don’t hesitate to comment below!