The classification of organisms began long ago by the Greek philosopher Aristotle who grouped animals and plants into basic groups called genera. The singular is genus. The word species came into being later on when scientists added a set of descriptive terms to a particular genus when they wanted to describe a specific organism. Carolus Linnaeus, a Swedish Biologist, devoted his life to improving this system by building on the foundations laid.

Taxonomy is the branch of biology that groups and names organisms based on similar characteristics. A group or organisms at a particular level in a classification system is called a taxon.

This branch of biology does not vary from country to country. There are a set of rules that govern the grouping and naming  of organisms, and every where in the world in every language, the names and groups are the same. They do not change. This is to ensure that a scientist in Russia will know which organism a scientist from Spain is speaking about when he happens to mention Quercus rubra (Red Oak).

There are a set of rules that scientists follow to ensure that this system remains standard and precise for easy communication:

To make the groupings more useful, the classification system became more involved. It stretched beyond just the simple two category genus and species. 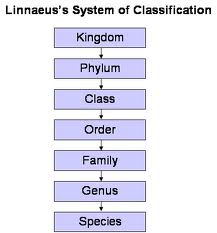 There are currently six recognised kingdoms: Archaebacteria, Eubacteria, Protista, Fungi, Plantae and Animalia. These kingdoms can be grouped again, so that they are easier to remember and understand. See table below.

Eubacteria are separate because they are more complex that archebacteria. Their chemical makeup is different. They are everywhere and are the bacteria that people are most familiar with. Some can be helpful and produce foods like yogurt. However there are harmful ones, for example Streptococci that can when they infect a person can give strep throat.

Protists consist of slime molds, algae and bacteria. Protists include all microscopic organisms that are not bacteria, animals, plants, or fungi. They are not classified under bacteria because protists are mostly unicellular and include organisms with some characteristics not related to bacteria.

The plant kingdom contains all the plants that we have come to know: flowering plants, mosses and ferns to name a few. With over 250,000 species this is the second largest kingdom.

The animal kingdom is the largest kingdom with over 1 million known species with more being discovered as time passes.

Fungi include mushrooms, mold and mildew.

If you have any questions or clarifications don’t hesitate to comment below!!