Weathering can be divided into two main types:

This involves the disintegration of rocks. Climate, rock type and structure, biotic agents and man all contributes to the various physical weathering processes which cause rocks to disintegrate. By these processes rocks are broken up into smaller pieces. Thus type of weathering predominates into areas where there is extreme coldness or dryness. There is no chemical change in the rock composition but a change in size and shape of the rock particles.

The processes involved are:

(i) Thermal Expansion and Contraction (Insolation)

In arid and semi-arid regions such as in tropical desserts, rocks are broken up into smaller fragments as a result of high diurnal temperature range i.e great daily extremes of temperature. High temperatures during the day results in the expansion of rocks. Rapid radiation at nights results in rocks undergoing contraction . The expansion and contraction through heating and cooling , that is, temperature changes, set up stresses in rocks. Eventually rocks are broken up grain by grain, a process termed granular disintegration. Much of the disintegration is assisted by dew formation.

Rocks have different mineral constituents, show different rates of coefficient of linear expansion. The rocks are subjected to stresses and strains, their durability or cohesion is weakened, consequently they split apart.

Through temperature changes too, curved rock shells or layers are separated or flaked off in succession, parallel to the surface and in concentric layers. Such a process is termed exfoliation (removal) and is common in African savannas. It also refers to the spalling or breaking up of rocks. The term onion weathering is also applied since such rocks as granite peel or flake off in layers similar to that of an onion. 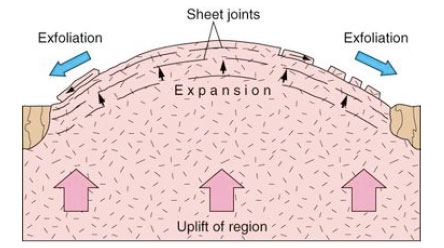 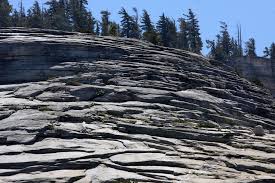 Rocks with well defined joints are broken up into blocks due to the process of expansion and contraction. This results in block disintegration. 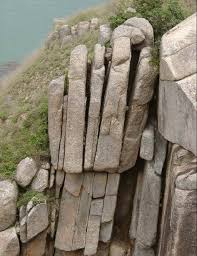 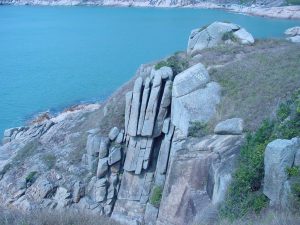 Some large  rock masses are subjected to rock shattering. Blocks disintegrate along new lines of weaknesses producing angular rock fragments. The angular rock wastes or coarse debris deposited at the base of mountains are termed screes.

Frost action is a mechanical weathering process caused by alternative or repeated freezing and thawing of water in pores and cracks, joints and fissures. In high mountain areas, that is, in high altitudes and in sub-arctic regions, frost action causes rocks to disintegrate into blocks. When water freezes into interstices by 10% and pressure is exerted on the surrounding rock layers. When the ice melts, the opening can hold more water, so that on freezing, the joints become wider and deeper. 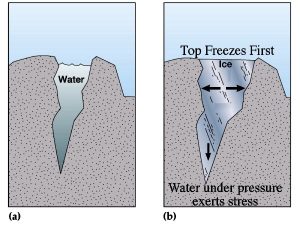 The resulting expansion causes the rocks, especially bedded rocks to split into plates.The ice acts as a wedge, a process termed frost wedging. Alternate freezing and thawing causes moisture to penetrate further downwards causing the inner layers to be loosened. Angular rock fragments of various sizes are produced. Frost action or frost weathering is common in porous and well bedded sedimentary rocks such as shale, sandstone and limestone. Frost action also assists in block disintegration, in which blocks are broken up into blocks.

The shattering of rocks in most noticeable in mountain areas eg, cold areas where the crestline has a jagged appearance. The angular rock debris which develop, comprise of a mantle of material at the front of the mountain slope forming screes or a talus slope. Talus cones are steep and unstable. 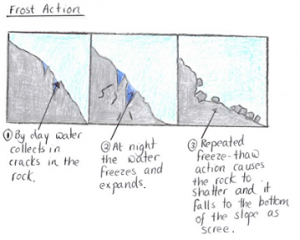 (iii) a. Weathering due to Pressure Release on Rocks

Rocks within the earth’s crust undergo a higher pressure than  rocks which are exposed at the surface. the pressure is caused by the weight of the rocks above it. Due to the process of erosion and denudation, the surface rocks becoming gradually eroded, resulting in the underlying rocks becoming exposed to the surface. In this way, there is less pressure and they become exposed to high temperatures and moisture in the atmosphere. The rocks eventually are exposed, expand and crack, consequently breaking up.

b. Dilation- This process is by which rocks are fractured due to removal of the underlying rock or ice. Rocks on the surface removed by erosion or the melting of large masses of ice cause a decrease in the pressure on the exposed rocks.