Some of the most frequently used verbs in French do not follow the conjugating patterns of regular verbs, and are therefore called irregular. Irregular verbs differ from the regular form in one or more of the following tenses:

The following verbs have an irregular present participle and imperative tense:

Irregular verbs have to be learnt since they do not follow a general rule. However, some irregular verbs, with their endings in capital letters below, follow the same conjugation pattern : 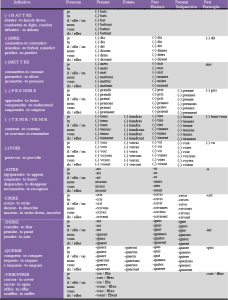 The ‘(-)’ represents verbs from which other compound verbs are often formed.

The symbol ‘-‘replaces the prefix of verbs which share the same stem.

Blank spaces indicate that the conjugation of the relevant tense follows the regular pattern for that verb ending.