All living things (organisms) have seven characteristics in common. They all:

1. Reproduce– produce an offspring (organism of its own kind)

2. Feed/need nutrients– make their own food (plants), or consume readymade food as a source of energy

3. Respire– release energy from food with the aid/use of oxygen

4. Grow– increase in size by getting taller or wider

5. Excrete– get rid of unwanted substances

6. Move– plants move parts of themselves while animals often move from place to place

7. Sensitive– plants and animals react to changes in the environment.

Although all organisms have these characteristics, there are differences amongst them that enable them to be classified differently.

Biological classification was originated in the work of the Swedish naturalist Carolus Linnaeus, where classifications were done based on shared physical characteristics. The science of classifying into ordered systems that indicate a natural relationship is known as taxonomy. Taxonomy involves the naming of organisms and placing these organisms into relevant groups based on their similarities. The taxonomic classifications are as follows: 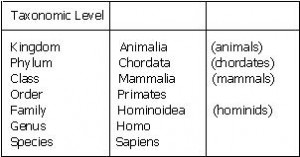 The list above is in the order of the largest (kingdom) to the smallest (individual species). The kingdom is the most general (broad) classification, while species is the most specific means of classifying an organism.

The basic criterion for an organism to belong to the same species is the ability to interbreed. If two organisms of different species try to breed then there will not be any offspring or the offspring will be sterile. An example of this is when a horse (Equus caballus) tries to mate with a donkey (Equus assinus).

You may be wondering why we classify. The answer is simple; it brings order and makes life easier. There is however no single perfect classification system and as we learn more about organisms our original classification is modified.  For example:  a small child may classify all four legged organisms  as dogs, but over time as the child learns and grows he/she will notice that there are similarities and differences within the group of four legged animals, and will  develop a  better system of classification. This is similar to what biologists have done over many years.

1. The science of classification is called taxonomy.

2. Various species are located and classified in an ecosystem.

3. Species are a group of closely related organisms that are able to interbreed and produce fertile offspring.