The transfer of electrons from one atom to another is called ionic bonding. This type of bonding occurs between metals and non-metals. The compounds formed are called ionic compounds. As stated previously, metals try to lose their outer electrons while non metals look to gain electrons to obtain a full outer shell. When metals lose their outer electrons they form positively charged ions called cations. When non-metals gain electrons they form negatively charged ions called anions. An example is shown below: 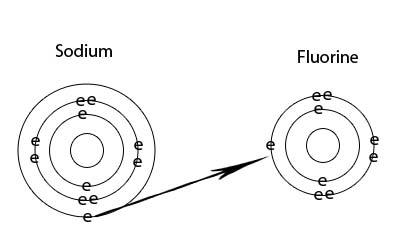 The arrow represents the transfer of an electron from a sodium atom to a fluorine atom. This transfer results in the formation of: 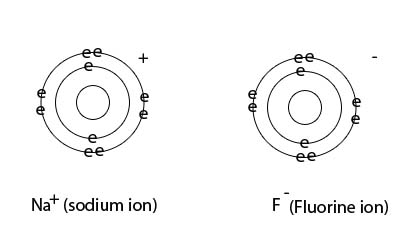 The fluorine atom accepts this negative electron and is now a negatively charged fluorine anion, because it has more electrons than protons.

These 2 ions are strongly attracted to each other because of their opposite charge. A bond is now formed and the resulting compound is called Sodium Fluoride