How Osmosis applies to Organisms

Cell membranes are often compared with a Visking tube as they only allow certain substances to pass through them. This is termed as selective permeability or partially permeable.

The body is made up of approximately 70% water. The cytoplasm of cells contains a lot of this water. This means that a lot of osmosis occurs within the body as the concentration of the cytoplasm may vary from time to time. Different solutions will have different effects on red blood cells as it regards to osmosis. A hypotonic solution has higher water concentration than the contents of the cell. A hypertonic solution has a lower water concentration than the cell contents.

Because animal cells have no cell wall, they are not strong enough to withstand the pressure caused from swelling. Water therefore moves by osmosis into the cell and the cell becomes swollen and bursts, dispersing the cell contents when the cell is exposed to a hypotonic solution. The bursting of a cell is called lysis of the cell. In a hypertonic solution, water will leave the cell and enter the surrounding solution. In this case, the cell will most likely shrink and become shrivel (flaccid). An isotonic solution has equal concentration of water outside and inside the cell so there is no net movement of water. The cell remains normal.

In the case of plants, many prefer the water concentration being greater outside the plant. Unlike an animal cell, plant cells have a cell wall. This means that the plants cell will become turgid in hypotonic solution, but will not burst as water moves in the plant. As water moves in the plant and the concentration of water in the plant gets greater, eventually equilibrium is reached (equal concentration of water inside and outside the cell). After this point, any water coming in the plant cell is released at an equal rate thereby achieving an osmotic balance. This water movement inside plants is essential for building pressure, called turgid pressure. Turgidity is important in plants as it helps them to stay upright and keeps the leaves firm. In a highly concentrated solution, plant cells will become shrivelled. If the surrounding solution is highly concentrated, plasmolysis will occur. Plasmolysis occurs when the cell membrane surrounding the cytoplasm shrinks further and further away from the cell wall. This often results in the death of the cell as the cell membrane usually gets damaged while it gets torn away from the cell wall. 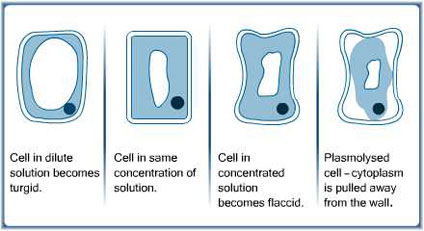 Many times the movement of ions requires movement against a concentration gradient, this is called active transport. Energy is used because substances must be moved against their natural tendency to diffuse in the opposite direction. Many times plants (roots) require more minerals from their surroundings although they have a greater concentration of minerals inside their cells already. This movement of ions is called active transport.