This is a group of highly reactive metals also called the alkali metal series, and contains the metals Lithium, Sodium, Potassium, Rubidium, Cesium and Francium. Hydrogen is also a member of this group however, it shares both the properties of a group 1 metal and a group 7 non-metals. These metals possess 1 electron in their out electron shell as shown below: 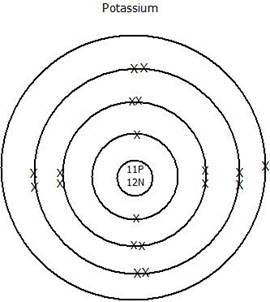 The electronic configurations for the elements in group 1 are shown below:

Please refer to the section on Atomic Structure if you are having difficulty understanding electronic configuration.

Reactivity increases with increased atomic size as it is easier to remove the outer electron with increased atomic size. This is so because the outer electrons are further away from the nucleus and there is a resulting loss of electrostatic forces of attraction which exists between the negatively charged electrons and the positively charged nucleus. With this in mind the order of reactivity is as a follows: