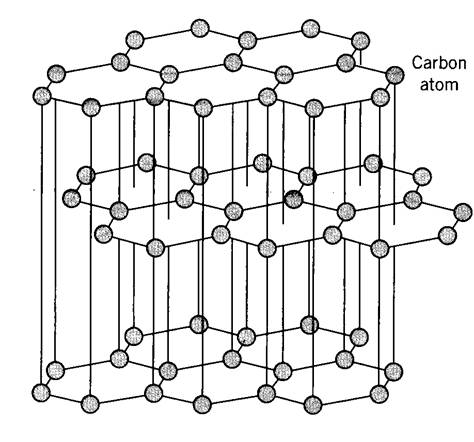 In graphite, each carbon atom is bonded to three other carbon atoms and the atoms are arranged in hexagonal rings. These rings are joined to each other to form layers of atoms which are held together by weak forces. This results in a giant structure with the following properties:

-Graphite has a relatively high melting and boiling points but these are low when compared to diamond. This is because of the large number of bonds which need to be broken by heat energy for the substance to become molten.

-Graphite conducts electricity because all the electrons on the outer shell of the carbon atom are not involved in bonding, hence motion of free electrons is possible and this results in electricity.

-Graphite is soft and greasy and is used as a lubricant. The is because the weak forces that hold the layers together are easily broken, causing the layers to slide over each other.