Blood is a rich red liquid that is transported through the body. The average human has about 5 litres of blood in his/her body. Blood can be considered to be made of 2 parts, plasma and blood cells (red and white blood cells). This may not be noticeable on the first analysis, however after spinning a capsule of blood in a centrifuge, the blood cells and platelets settle at the bottom and a straw-coloured clear liquid is left on top. The straw coloured liquid is called plasma.

Plasma contains about 90% water and is a clear straw-coloured liquid containing solutes (dissolved particles) such as salts, medicines, hormones, nitrogenous waste, amino acids, carbohydrate, soluble fats and proteins. Plasma accounts for approximately 55% of blood. The remaining 45% is blood cells and platelets. Antibodies may also be found in plasma. 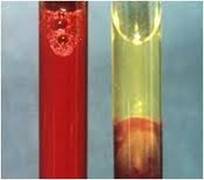 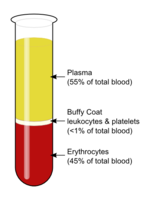 The diagrams above shows blood before (extreme left) and after (middle and right) it has been centrifuged. The red blood cells would settle at the bottom followed by the white blood cells and platelets, and plasma would be at the surface layer.