Mitosis involves the production of new cells which are identical to the parent cell. 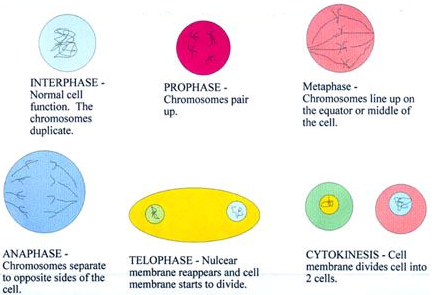 The diagram above shows how identical cells are produced from the replication of one cell. The term diploid simply means that the daughter cells have the same number of chromosomes as the original (parent) cell.

Binary fission occurs when a cell gets so large that its surface area to volume ratio is too small to allow gas exchange. The cell and all its content will then divide to form two identical cells. An example of an organism that reproduces in this manner is the amoeba.