(1) The decrease in value of assets (fair value depreciation)

(2) The allocation of the cost of assets to periods in which the assets are used (depreciation with the matching principle).

The former affects values of businesses and entities. The latter affects net income. Generally the cost is allocated, as depreciation expense, among the periods in which the asset is expected to be used. Such expense is recognized by businesses for financial reporting and tax purposes. Methods of computing depreciation may vary by asset for the same business. Methods and lives may be specified in accounting and/or tax rules in a country. Several standard methods of computing depreciation expense may be used, including straight line, and reducing balance methods. Depreciation expense generally begins when the asset is placed in service.

Factors to consider when calculating depreciation

Depreciation is the gradual decrease in the economic value of the fixed assets of a business, either through physical depreciation, obsolescence or changes in the demand for the services of the asset in question.

While depreciation expense is recorded on the income statement of a business, its impact is generally recorded in a separate account and disclosed on the balance sheet as accumulated depreciation, under fixed assets, according to most accounting principles. Accumulated depreciation is known as a contra account, because it separately shows a negative amount that is directly associated with another account.

There are several methods for calculating depreciation, generally based on either the passage of time or the level of activity (or use) of the asset.

Straight-line depreciation is the simplest and most-often-used technique, in which the company estimates the disposal value of the asset at the end of the period during which it will be used to generate revenues (useful life) and will expense a portion of original cost in equal increments over that period. The disposal value is an estimate of the value of the asset at the time it will be sold or disposed of; it may be zero or even negative. Disposal value is also known as scrap value or residual value.

Depreciation may be given as a fixed percentage annually and may be applied on cost in the first year, but in subsequent years applied on the reduced balance or net book value of the previous year. This method is called the reducing balance method.

Below is an Example

A motor van was bought on January 1, 2009 for $10 000. It has an estimated life of ten years with an annual depreciation of 10% straight line method. Calculate the annual depreciation for 2009 to 2011 and make entries to Provision for Depreciation Account─Motor Van, and Balance Sheet. 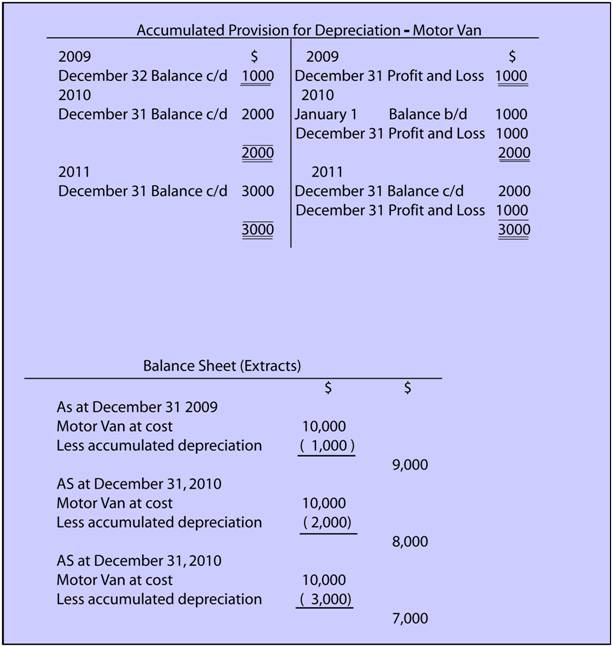