Answer the THREE questions in this section.

1. An accounting student prepared the following trial balance for Heavy Metal Enterprises for the year ended 31 December 2011 and inserted the amount of $51,200 for capital. 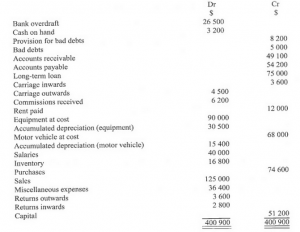 (b) You are presented with the following day books:

(ii) Prepare the debtors Control Account and any other account in the General Ledger for the month of September.

2. The Sales Ledger of JJ’s Paradise showed the following balances at December 3, 2010.

Mr. JJ has decided to write off these three receivables as bad debts.

(a) (i) Prepare the journal entry on page 5 of JJ’s journal to write off three receivables. (Narrative required).

The remaining receivables totalled $28,320 at December 31 2010. Mr. JJ believes that 10% of these outstanding receivables are LIKELY to become bad debts. He wishes to make adequate provision for these doubtful debts.

(ii) Prepare the journal entry with a narrative, to create the Provision for Doubtful Debts Account.

On December 31, 2011, Mr. JJ’s receivables AFTER bad debts totalled $25,000. He decided to use the same rate of 10% as the previous year in accounting for doubtful debts.

(iii) Draw up the provision for Doubtful Debts Accounts for the two years, 1 January 2010 to 31 December 2011, to show the change in the provision. Balance the account at the end of each year.

(b) (i) State ONE reason why adjustments are made to financial statements.

(ii) Identify ONE concept which guides adjustments to financial statements.

(iii) Explain how the concept identified in (b) (ii) above guides adjustments made to financial statements.

3. (a) V. Cheeseman is preparing his summary accounts for the month ended 31 August 2011. He finds the following errors which may or may not affect the summary of the bank account entries in his cash book.

(i) Prepare the journal entries to correct the errors above. (Narratives not required).

Beginning with the incorrect balance of $2570, correct the summarised Cash Book for the relevant errors given above. Show all working.

(b) The following information is recorded in EITHER the bank statement or on V. Cheeseman’s Cash Book but NOT in both.

(i) Using the corrected summarised Cash Book balance from a(ii) above, draw up an updated Cash Book for the month ended 31 August 2011.

(ii) Starting with the updated Cash Book balance, draw up a Bank Reconciliation Statement for V. Cheeseman for the month ended 31 August 2011.

Answer any TWO questions in this section.

4. P and G are two sole traders who decided to trade under the partnership name of PG Enterprises. The following are lists of balances for EACH trader before the formation of the partnership.

(a) (i) Prepare individual opening entries as at 1 May 2012 to record EACH sole trader’s contribution to the partnership.

(ii) Prepare a classified summarised Balance Sheet for PG Enterprises as at 1 May, 2012, using the order of performance.

(b) The two partners anticipate a profit of $99,000 at the end of the first year’s trading, but have not yet decided what profit-sharing ratio to adopt.

Calculate EACH partner’s share of profit under the following schemes:

(i) In capital sharing ratio

(c) List TWO features, other than the profit sharing ratio, that should be included in P and G’s partnership agreement.

5. Explain, in ONE sentence, the meaning of EACH of the following statements:

(i) The owners of a corporation benefit from limited liability.

(ii) Farris London, a shareholder, wants to know what the Board of Directors of Aries Limited does.

(iii) The Registrar of Companies has received the documents required to start up the new corporation.

(i) the issue of the remaining ordinary shares at $1.50 EACH.

(ii) the issue of the remaining preference shares at $1.00 EACH.

(iii) the reduction in debentures.

(c) Other balances found on the books include:

Prepare the Appropriation Account for Aries limited for the year ended 31 May 2011. Show all working.

6. Simon Long makes decorative concrete ornaments. He recorded the following information about his manufacturing operations for the year ended 31 December 2011. 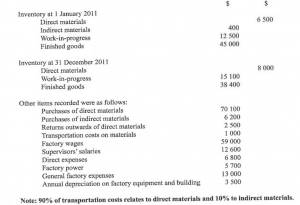 (a) Calculate the following costs for Simon Long:

(b) Prepare the Manufacturing Account for Simon Long  for the year ended 31 December 2011.

The co-operative paid out dividends of 10c per share in its first year of operation and transferred the remainder to a Members’ Education Fund.

(a) Prepare the Income statement and the Appropriation Account for Liontown Co-operative for the first year ended 31 December 2011.

(b) During the second year of operation, Liontown Co-operative began lending money to members who wished to start their own small business.

(ii) Name ONE committee that Liontown is LIKELY to use to carry out its business.

(iii) State ONE purpose of the Member’s Education Fund.