For a images and a listing of the unspecialised plant and animal cell structures see this post.

The microbes to be discussed here include: viruses, bacteria and fungi.

Viruses are parasites that need a host cell to survive. As a result, they are considered non-living because when outside of a cell they are inert. They consist of a nucleic acid, either DNA (deoxyribonucleic acid) or RNA (ribonucleic acid), surrounded by a protective protein coat called the capsid. Sometimes there is another membrane surrounding it called the envelope and they may or may not have a tail.

Viruses cannot be see with the naked eye. They are ultramicroscopic and vary with size. The smallest is about 20 nanometres whereas the largest is about 300 nanometres.

Viruses also vary in shape. They can be helical, polyhedral or complex.

They do not have a nucleus, and they have two types of DNA: plasmid and chromosomal. The chromosomal DNA carries most of the information whereas the plasmid DNA carries extra information. Some bacteria have flagellum: a whip like tail. This helps the bacteria to move along.

Fungi can be single celled or complex multicellular organisms. They are found in many different habitats, however most  are found in soil or on plant material rather than in the sea or fresh water. Fungi can cause diseases. In crops fungal diseases can lead to significant monetary loss for the farmer. In animals, diseases that can occur are athlete’s foot, ringworm and thrush.

There are two main types of fungi: multicellular moulds and single celled yeasts.

Yeasts are microscopic unicellular fungi with a single celled nucleus and eukaryotic organelles.

The image below shows a comparison of all three microbes and gives a brief summary as well as a picture of their overall structures. 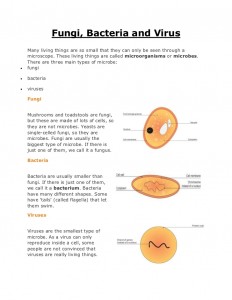 If you have any questions or concerns please don’t hesitate to comment below!!